Recently Gil Maurer, a retired publishing executive, and his wife, Ann, did something we all dream of : they called Paris home for a month. Among the couple's many discoveries was a great rental apartment that served as their base. The Maurers enjoyed it so much that we asked Gil to share the story of how they found it. 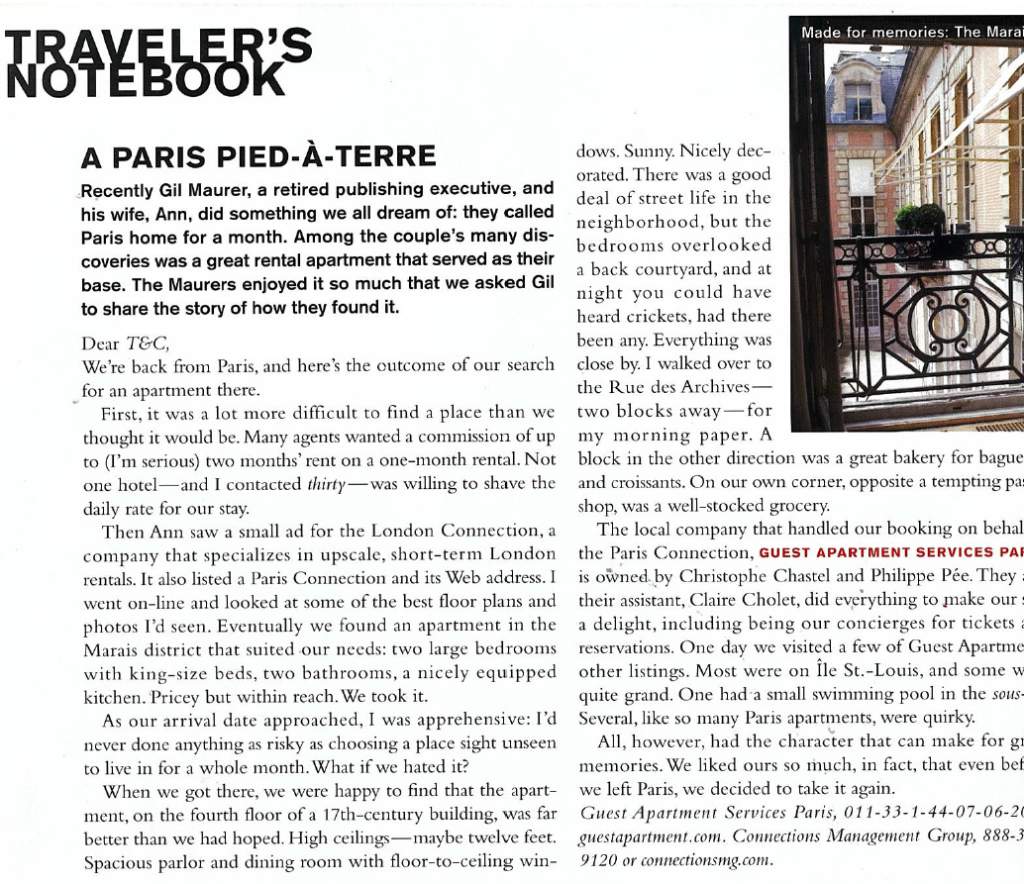 Dear T&C,We're back from Paris and here's the outcome of our search of an apartment there
First it was a lot more difficult to find a place than we thought it would be. Many agent wanted a commission of up to (I'm serious) two month's rent on a one month rental. Not one hotel- and I contacted thirty – was willing to shave the daily rate for our stay.
Then Ann saw a small add for the London Connection, a company that specializes in upscale, short-term London rentals. It also listed a Paris Connection and its web address. I went on-line and looked at the best floor plans and photos I'd seen. Eventually we found an apartment in the arias district that suited our needs: two large bedrooms with king-size beds, two bathrooms, a nicely equipped kitchen. Pricey but within reach. We took it.

As our arrival date approached, I was apprehensive : I've never done something as risky as choosing a place sight unseen to live in for a whole month. What if we hated it ?

When we got there, we were happy to find the apartment, on the fourth floor of a 17th century building, was far better than what we hoped. High ceiling – maybe twelve feet. Spacious parlor and dining room with floor to ceiling windows. Sunny. Nicely decorated. There was a good deal of street life in the neighbourhood, but the bedrooms overlooked a courtyard, and at night you could have heard crickets, had there been any. Everything was close by. I walked over to rue des Archives- two blocks away- for my morning paper. A block in the other direction was a great bakery for baguettes and croissants. On our own corner, opposite a tempting pastry shop, was a well stocked grocery.

The local company that handeld our booking on behalf of the Paris Connection, Guest Apartment Services Paris, is owned by Christophe Chastel and Philippe Pee. They and their assistant Claire Cholet, did everything to make our stay a delight, including being our concierges for tickets and reservations. One day we visited a few of Guest Apartment's other listings. Most were on Ile Saint Louis, and some were quite grand. One had a small swimming pool in the sous-sol. Several like so many Paris apartments were quirky.

All, however, had the character that can make for great memories. We liked ours so much, in fact, that even before we left Paris, we decided to take it again. (…)