“When we came back to Paris it was clear and cold and lovely.” Ernest Hemingway, A Moveable Feast. FROM the window of our fifth-floor, Left Bank apartment on Rue du Cardinal Lemoine, I watch river barges racing along a swollen Seine and men bowed against the wind trailing cigarette smoke as they cross over the Pont de la Tournelle. I lean out a little and look to the left, there is Notre Dame, sleeping by the river like a hulking beast, its bent back streaked with grime. A sharp gust of wind rattles the double glazed windows as I shut them against the cold and turn to survey our very large and pretty apartment. 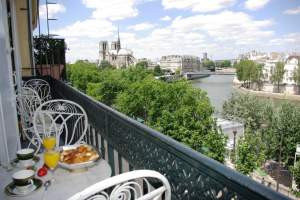 We have just arrived from Gare du Nord where a Guest Apartment Services’ driver was waiting to whisk us across town, hand over the doorkeys and send up our luggage before us because the ancient, creaking lift is so small only two can travel at once. (I’m embarrassed to report that later in the week this same petite lift ascends filled only with shopping bags.)

We are visiting Paris in the late autumn for our wedding anniversary, number 20, so dinner is top of the agenda. With no particular plan, we bid driver Stephan au revoir, grab our coats and strike out into the damp night walking all the way through the fifth and sixth arrondissement looking for a likely bolthole.

And then the warmly illuminated windows of famous Brasserie Lipp beckon like a light at the end of a dock. Inside we join scarf-swaddled Parisians and their small dogs and order roast chicken from the delightfully snooty waiters. (When Ernest Hemingway was flush he came to Lipp’s to tuck into potato salad and sausage, washed down with a distingue of cold beer.) 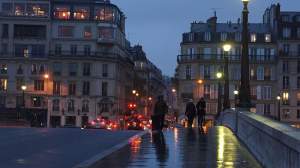 We find ourselves thinking a lot about food. Perhaps that’s because our apartment bedroom looks across the street and directly into the kitchens of one of Paris’s most famous restaurants, La Tour d’Argent. Every evening before dinner I lie on my bed in the dark like a culinary voyeur watching the chefs in their towering toques bustling about with copper pans and skillets.

And every morning my husband rises early and crosses to Ile Saint-Louis to a tiny, old-fashioned boulangerie to buy a baguette a l’ancienne and sticky pastries.

On day two, after ferreting through the shelves of Shakespeare And Company on Rue de la Bucherie and buying a restored edition of Hemingway’s A Moveable Feast, we discover to our great delight that he once lived on “our” street.

In the 1920s this was a very poor part of Paris and Hemingway writes of the goatherd arriving early on spring mornings, or of the valet de chambre at “Tour D’Argent” selling English language books abandoned by guests at a small stall “not far along the quai”.

And when times were thin and food barely affordable he plotted a route “where you saw and smelled nothing to eat all the way from the Place de l’Observatoire to the rue de Vaugirard”. The upside was a greater appreciation of Paul Cezanne’s artworks, which Hemingway recommended viewing when “belly-empty, hollow-hungry”. It’s advice we ignore, choosing instead to lunch expansively in the Musee d’Orsay’s palatial restaurant before admiring the paintings.

Even in the wee hours our thoughts turn to food. Gripped by jetlag and awake at an ungodly time, we set out in the dark up Cardinal Lemoine pausing to pay homage at Hemingway’s and James Joyce’s former apartments, before exploring the narrow, cobbled Rue Mouffetard where fishmongers are taking delivery of oysters and scallops in their shells and butchers are hanging guinea fowl like Christmas baubles or loading rotisseries with plump chickens.

We dawdle until the cafe owners on Place de la Contrescarpe set out their chairs, light gas heaters and fire up the coffee machine, then we press on to the Luxembourg Gardens where great piles of autumn leaves are raked into cages and urns spill with chrysanthemums. And it’s still too early for breakfast.

We rarely venture far for food; it’s just five paces to the street corner for beef bourguignon at Chez Rene, a dimly lit brasserie where the walls are crowded with vintage art posters and the crowd is entirely local: at a corner table, well-behaved children chat with a formidable grand-mere wearing oversized spectacles and sporting an almost-bald pate and voice so gravelly it could only mean 20 Gauloises a day.

Beaujolais nouveau day is spent on the island at Les Fous de L’Ile where the endive tarte tatin is outstanding and to celebrate our anniversary dinner we book a table at one of the prettiest dining rooms in the city, in L’Hotel on Rue des Beaux-Arts. Oscar Wilde spent his last days here so it’s sante with a couple of Dorian Grays, an age-defying concoction of gin, estragon, sirop de passion, jus d’annanas and bitter rhubarb.

But nowhere is quite as cosy as our apartment Arum, one of 65 managed by Guest Apartment Services, whose proprietors Christophe Chastel and Philippe Pee are well known to Aussie Francophiles. The company’s inventory includes a range of styles and varying levels of luxury but all apartments are located on Ile Saint-Louis or in the Marais and Saint Germain des Pres with prices from €176 ($270) a night. 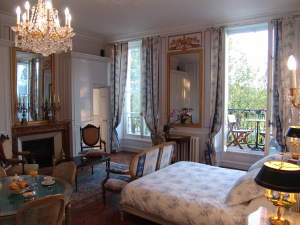 Tucked into the roof of a 19th-century riverfront apartment building, Arum is rated “superior contemporary” and its location could not be bettered. Furnished in art deco style and featuring a small fireplace and ancient exposed beams in one bedroom, it is extremely comfortable, spotlessly clean and well equipped, with enough wine glasses to entertain an army.

The very stylish Chastel and Pee have ensured all the important luxuries are here, from piles of good towels, voluminous bathrobes and soft, monogrammed linens to featherdown pillows, fresh flowers, toiletries and free WiFi.

Their smart headquarters are located nearby on Ile Saint-Louis where downstairs in the engine room, great whirling washing machines deal with a mountain of the finest Italian sheets (from the company that supplies The Ritz) while a team of 20 is on hand to deal with anything from a blown light bulb to dodgy WiFi. These stylish Frenchmen are devoted foodies and in each apartment they leave a list of where to eat and where to buy everything from the best bread, cheese and ice cream to wine and late night mini-markets.

Nothing is left to chance ensuring each guest gets to live, and eat, like a local.

Christine McCabe was a guest of Guest Apartment Services Paris